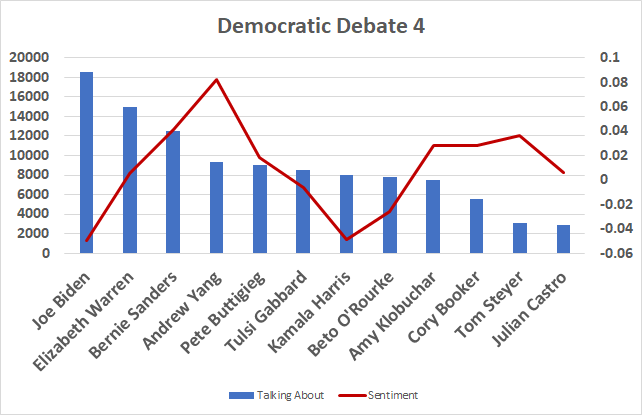 The Ohio debate took place in the middle of a changing Democratic primary as Joe Biden’s hold on the frontrunner position was starting to be viewed as tenuous with some polls showing Elizabeth Warren in the lead.

Given the changes, the debate saw many candidates performing in new roles. For Warren, she had to demonstrate her ability to perform as a potential frontrunner, while for Biden, it was an opportunity to regain his momentum and lead in some of the polls. At the same time, many eyes would be on Bernie Sanders after his health issues, and others would be watching to see which of the candidates polling in the single digits would be able to gain momentum.

Based on online discussions, Joe Biden’s performance was not what he needed to rebuild his lead in the polls. As in all of the debates to date, Biden was the subject of the highest share of online discussion, but the sentiment of those discussions was among the most negative of any of the candidates. Elizabeth Warren was the focus of many of the more pointed discussions on stage, and it resulted in a lower than normal sentiment for her.

Bernie Sanders scored well with positive sentiment on the third-highest volume. After the top three, Yang, Buttigieg, Gabbard, Harris, O’Rourke, and Klobuchar all generated a similar amount of online mentions. Yang scored the highest overall sentiment, while Buttigieg and Klobuchar also recorded positive scores. Gabbard, Harris, and O’Rourke were all in negative sentiment territory, while Booker, Steyer, and Castro were unable to generate significant volumes of discussion.

As we have for the past two sets of debates, we analyzed comments from approximately one quarter million social media accounts. The nature of real-time, short-text comments means that the vast majority of online mentions focused on the candidates, as opposed to the issues they are discussing. However, we sampled our dataset for comments with specific mentions of candidates along with issues to get an idea of how the public reacted to each of the candidates speaking on the key issues.

Healthcare and the question of how candidates were going to pay for their plans generated the most issue-specific mentions during the debate, with Warren being the target for most of the other candidates.

While Warren’s sentiment was just barely on the positive side of neutral, this represents a significant decrease in the very positive sentiment scores she had earned in previous debates on the issue of healthcare. The high volume and lower sentiment combination indicated there is some weakness for Warren on the costing question that a number of the candidates were pursuing against her. The issue also proved to be a highlight Amy Klobuchar early in the debate as she scored well on her public option position.

Pete Buttigieg had the highest sentiment score on the impeachment question while Sanders, Yang, and Klobuchar were the only other candidates in positive territory.

Despite attempting to position himself as the original voice calling for impeachment two years ago, Tom Steyer earned the lowest sentiment of all the candidates, followed by Kamala Harris.

Biden had the worst combination of low sentiment and high volume, indicating his role in the narrative surrounding the inquiry continues to cause him problems.

With the most volume generated, Tulsi Gabbard was clearly looking to position herself as the candidate with the most to offer on the foreign policy front and used recent events in Syria to make her case. However, her attempts generally fell flat as she recorded a negative sentiment on the issue.

The issue proved to be difficult for all candidates as only Booker and Warren were in positive territory on low volumes. Of the higher volume candidates, Buttigieg had the best (least negative) sentiment between himself, Gabbard, Biden, and Klobuchar.

Various taxation issues made it into the discussion in Ohio, including the question of healthcare costs and their impact on middle-class taxes, as well as wealth tax proposals put forth by Elizabeth Warren and Bernie Sanders.

Online reactions favored Biden and Yang when the discussions turned to the wealth tax proposals indicating a relative lack of enthusiasm for the proposal put forth by Warren and Sanders.

Just as in the last debates, gun control put O’Rourke in the spotlight, and as been the case over the past month since the September debate, his message was not well received. With by far the most discussion volume, O’Rourke had a significantly negative sentiment score.

Yang and Gabbard scored the highest sentiments, although on minimal volumes on the gun control issue.

Kamala Harris generated the most discussion with her comments on abortion rights, but they received the lowest sentiment score of all the candidates on the issue.

Of the other candidates who generated moderate volumes, Biden had the highest sentiment while Yang and Sanders scored well on low volumes.

1) Warren was the target of many on stage, and while her overall performance was viewed as neutral, she saw reduced sentiment on issues such as healthcare that were previously viewed very positively for her. Biden’s overall numbers were weak, while Sanders’ had the best combination of volume and sentiment.

2) Yang, Buttigieg, and Klobuchar scored the best out of the candidates outside the top three positions occupied by Biden, Warren, and Sanders. Combined with the general consensus that they were the candidates that stood out on the stage in a positive manner, the debate could provide a shot in the arm for those campaigns.

3)  For Harris and O’Rourke, the debate was a continuation of performances that did not resonate with the public online and will likely fail to produce any kind of bump for them.