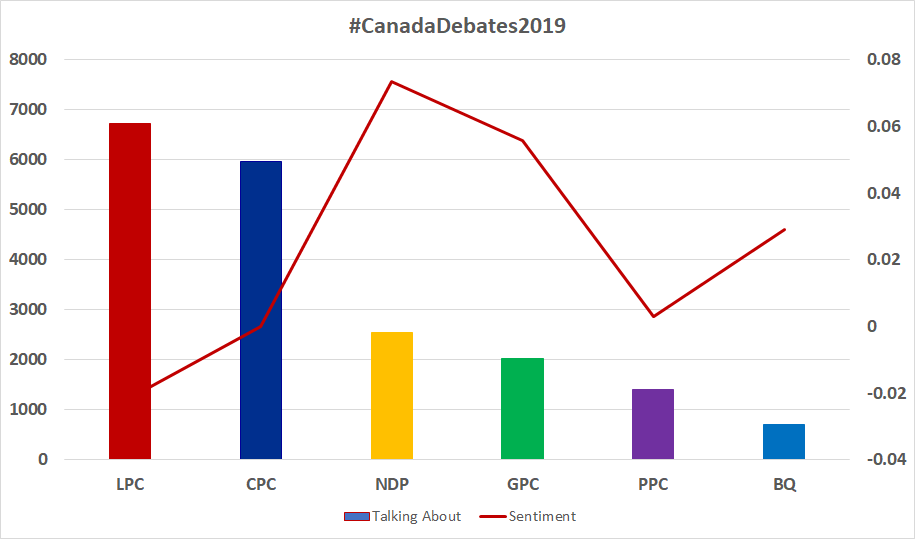 As the leaders of the six major Canadian political parties gathered for the only English language debate among all six party leaders, there was plenty at stake. With the Liberals and the Conservatives tied in the polls and the remaining parties showing enough strength in specific areas of the country to have a significant impact, all participants had much to gain or lose.

Eyesover monitored the debate in real-time and measured public reaction to not only the leaders, but also some of the issues discussed.

At Eyesover, we focus on the number of people talking about a leader or party by aggregating multiple mentions from the same account. For example, we record an account mentioning a leader 20 times as one “talking about” by averaging the sentiment of the 20 mentions to ensure high volume accounts cannot skew the data. We also disregard retweets on Twitter as well as accounts that demonstrate characteristics of bots or fake accounts.

Our talking-about numbers tend to correlate with results you will see in current polls, and the debate proved to be consistent that concept with the Liberals and Conservatives battling for the top spot and the NDP, Greens, PPC and Bloc following.

When we look at the sentiment being expressed in the discussions about each leader, Jagmeet Singh was the clear winner of the debate. His sentiment started strong and remained that way throughout the debate and post-debate scrums. Elizabeth May also generated positive sentiments throughout the night.

Justin Trudeau had the lowest sentiment score overall, but it did not start out that way. During the first thirty minutes of the debate, both Andrew Scheer and Maxime Bernier were lower on sentiment scoring. By the midpoint, however, Trudeau started losing ground. By the end of the post-debate interviews, both Scheer and Bernier were not only scoring higher than the PM, but Trudeau remained the only leader in negative territory. Whether the change was due to a weak Trudeau performance or a strong finish by Scheer and Bernier, the result is not one that the PM needed.

In a confirmation for those who claim today’s politics are mostly about personality, we found that 84% of the online comments that mentioned a leader or their party, focused solely on the person and did not mention any issue or topic being discussed in the debate.

This is not an unusual finding as the nature of real-time, short-text comments means that the vast majority of online mentions focused on the candidates, as opposed to the issues being discussed. However, we still sampled our dataset for comments with specific mentions of candidates along with issues to get an idea of how the public reacted to each of the candidates speaking on the three issues that generated the most discussion; Environment, Indigenous Issues, and Human Rights & Immigration.

The environment section of the debate generated the most issue-related discussion among the five themes with the Liberals and Conservatives recording neutral sentiment on high volume. The Bloc had the highest sentiment score but on very little volume.

When we broke out the language that was used, we see that the phrase climate change was significantly negative for the Conservatives, neutral for the Liberals and the NDP, and positive for the Greens.

Indigenous issues generated the second-highest volume of discussions, and it proved to be a problem issue for the Liberals and Conservatives as they both had negative sentiment scores.

The Green Party generated the most positive discussion, but all of the other four parties earned very high sentiment scores on the issue, albeit on low volumes.

In this wide-ranging section, the Green Party had the best sentiment score primarily due to positive comments surrounding abortion access. It also resulted in a very negative sentiment for the CPC.

Immigration discussions trended negative for the Conservatives, Liberals, and People’s Party, while it was generally neutral for the other parties.

Our debate metrics tracked what the polls, and our party support numbers at Eyesover, have been showing; the Liberals and Conservatives are in a dead heat, but not generating much enthusiasm outside of their support base.

It also shows that while the remaining parties have not been able to break through to challenge for the lead, they are all generating positive responses and volumes of discussion in certain areas that could have a significant impact on the election outcome.